THE TIE THAT BINDS

Well the QVC project is continuing to focus on work that will improve the future stability of the QVC. The forty 60+ foot deep pilings just put in will be the anchors for the repaired building. 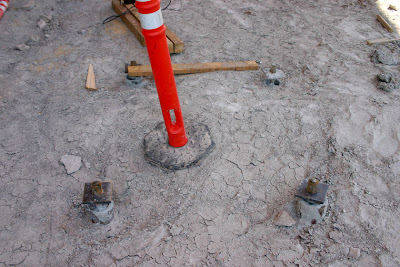 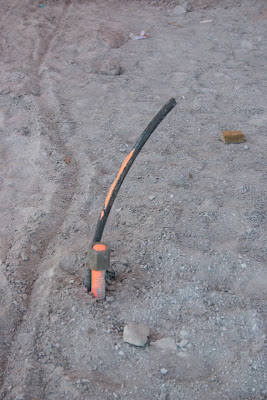 Each cement piling has a long, threaded, steel rod in it that will be bolted to the steel framework. The hose next to the threaded pipe was used to inject the cement into the drilling hole. 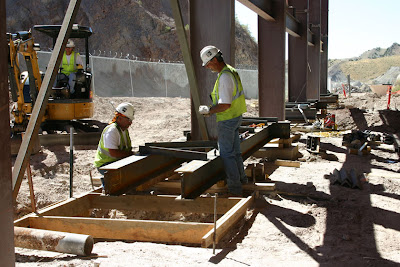 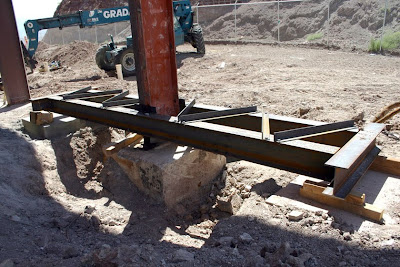 Steel beams are being placed horizontally at the base of each existing upright. The horizontal and vertical beams will be bolted together and the pilings will be bolted to the horizontal beams. When completed, these two systems will form a much stronger skeleton for the building, one that should resist any movement due to wetting and swelling of the bentonitic mudstone beneath it. 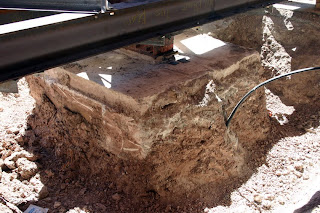 However, the concrete footer beneath each upright beam is only about 3 feet thick, too thin for the new design. So each the footer will need to be removed and a deeper one poured. The horizontal beams already in place will play an important role in how the replacement footers are put it. More on that later.

Photos: NPS
Posted by Land of the Dead at 7:56 AM No comments:

It has been a few weeks since I’ve posted anything here but we’ve been finishing up a busy and very productive summer field season in the paleontology operation at Dinosaur. It has been a banner year with a number of very exciting and interesting discoveries. We shall be reporting on some of these at the Society of Vertebrate Paleontology and Geological Society of America meetings this fall. At any rate, here are a few photos from the summer's fieldwork. 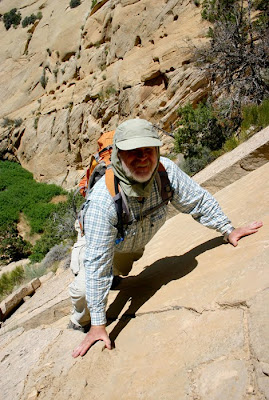 My colleague Dr. George Engelmann on the side of a canyon wall examining scorpion trackways in the Early Jurassic Nugget Sandstone. 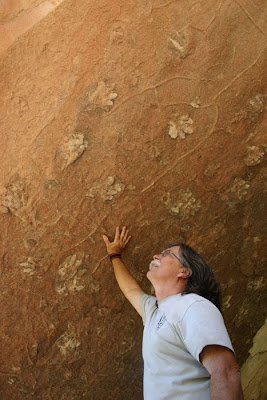 Yours truly musing over some Brachychirotherium tracks on the underside of an overhang in the Nugget Sandstone.


Since the demolition of the Rotunda, work at the Quarry Visitor has been more mundane and less dramatic, although of no less importance. One of the problems that plagued the old QVC had to do with the foundation and footers for the vertical steel beams that form the skeleton of the building. For some unknown reason, when the building was constructed in 1957 the footers never went deep enough to anchor into hard sandstone. Rather the footers were placed in the bentonitic mudstone, a rock that simply loves water. Once water seeped under the building the bentonite swelled and expanded --- and contracted as it dried out. Thus began the cycle that ultimately doomed the structure. 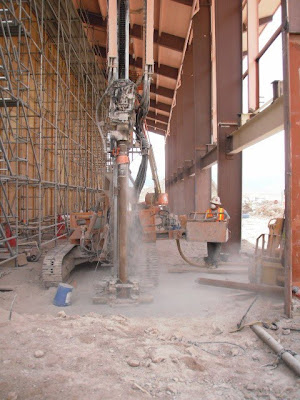 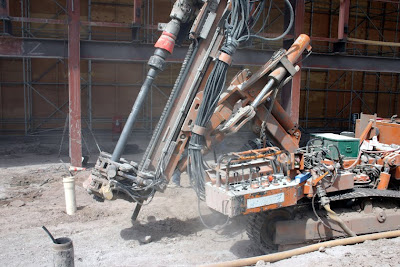 Part of the fix for the rehabbed QVC involves better anchoring of the steel framework. To that end, pilings are being placed deep enough down to be in hard sandstone layers beneath the building. That required drilling holes down to the right level, sometimes in excess of 60 feet! 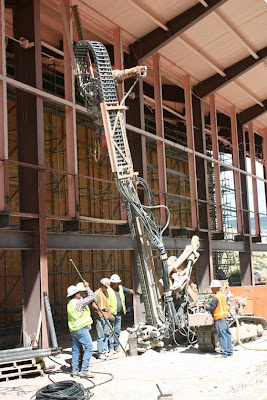 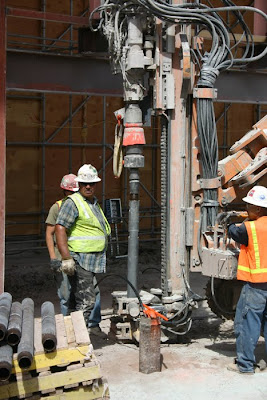 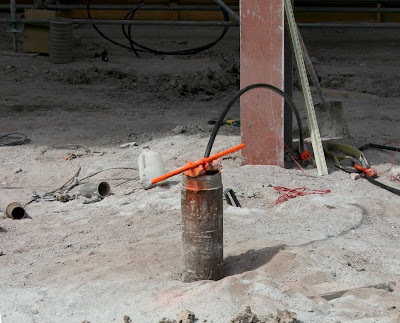 Next the holes are lined with steel casing, a threaded steel rod is inserted, and the hole is filled with cement. Ultimately some 40 new pilings will be put in and they will be bolted to the steel infrastructure via the threaded rods. This should strengthen the building and prevent future movement. However, the actual connecting of the pilings to the steel beams will require a few more rather interesting steps which we’ll follow in an upcoming post.

We’ve looked at various aspects of the relationship between architecture and fossils at Mesa Verde. Here we will discuss the most spectacular example of fossils in the service of architecture in the entire park, yet one most visitors never see – even though it is literally under their noses. 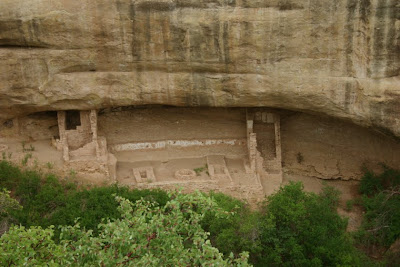 The Fire Temple at Mesa Verde is an unusual cliff structure in that it is a large open plaza that was not a dwelling but may have served as an area for ceremonial dances and other communal activities. The whitewashed back wall bears painted clouds, animals, cactus, and humans. Fire Temple dates from 1250 AD, only a few decades before the Mesa Verde area was completely evacuated by the Ancestral Puebloans. 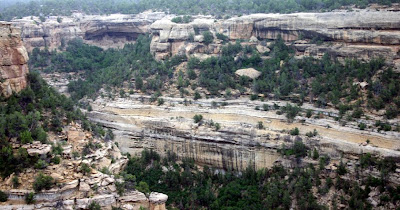 Fire Temple can best be seen from a stop on the popular Mesa Top auto tour route. However, just a short distance before the Fire Temple stop, is the Sun Point View pullout. From this stop one can get a panoramic view of a dozen cliff dwellings in the alcoves of Cliff and Fewkes Canyons. Of the millions of visitors who have stood here over the decades, few have ever looked down at the rocky surface they were standing on, except maybe to avoid tripping. Too bad for them.

Trace fossils are fossils resulting from organismal activities. Dinosaur footprints are a well known example. However, most trace fossils are formed by marine invertebrates living in and on ocean floor sediments. One of the more common fossil burrows goes by the scientific name Ophiomorpha. These are complicated burrows that run both vertically through sediments and along bedding planes within the sediments. The can run for several meters in length and have a distinctive pustulose or bumpy texture to the burrow walls. In today’s oceans Ophiomorpha-like burrows are made by callianassid shrimp. These shrimp press their own fecal pellets into the walls of the burrow, not only strengthening it, but giving it a distinctive bumpy texture. Given the great similarity between the modern burrows and Ophiomorpha fossils burrows, the inference is that the fossil burrows were also made by shrimp. Not necessarily callianassid shrimp but by shrimp with a similar burrowing lifestyle. 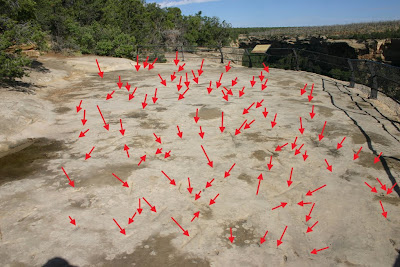 Remember that virtually all of the geology of Mesa Verde is made up of sediments laid down on the floor of Cretaceous seas that flooded the vast interior of North America. The broad and wide surface of the Sun Point View overlook is an exposed sandstone bedding surface of one of those seafloors. And it is rife with Ophiomorpha burrows. The red arrows in the photo above point to the most obvious of those burrows. They have been worn down by erosion, weathering, and foot traffic, but to the trained eye they stand out clearly. 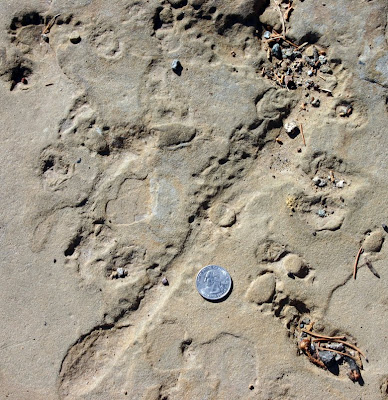 The most obvious Ophiomorpha fossils are those burrows that run parallel to the bedding surface. They appear as tubes or grooves, some with the characteristic bumpy texture. 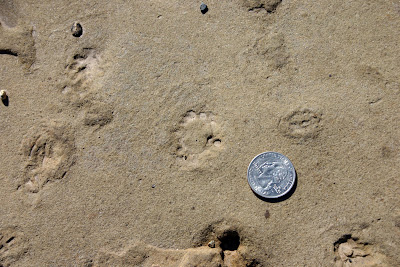 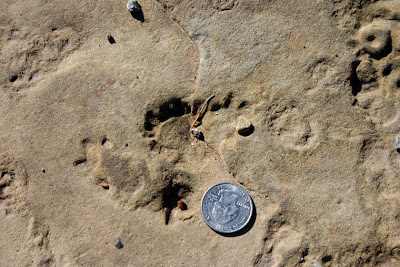 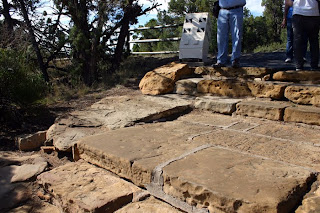 However, as we noted above, Opihomorpha burrows run both horizontally and vertically. Thus vertical tubes appear as circular structures on the bedding plane. They are about 1.5 -2.0 inches in diameter and show the characteristic texture. This can be best seen on some of the steps leading to the viewing area (see photo above). These circular fossils are sections through vertical parts of the burrow that run down to horizontal burrows still unexposed at a deeper levels.

So while 700+ years ago the Ancestral Puebloans danced their communal ceremonies on the plaza floor of Fire Temple, this rich deposit of extinct Ophiomorpha slept in its ancient sandstone tomb until centuries later it was exposed by modern man to form a place where people could gaze upon the architectural remains of that same extinct Puebloan culture. Ironic.

Photos: Dan Chure
Posted by Land of the Dead at 11:29 PM No comments: