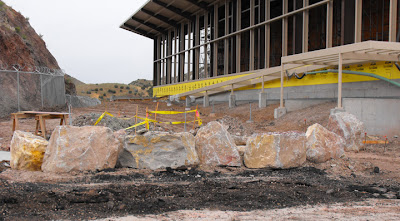 The new QVC, like the 1958 one, will be a striking and unique building, both pleasing to look at and be in. However, another consideration is the building’s surroundings. The gull-wing roof mimics the cut that the quarry sits in and the hills surrounding it. While designed to fit the terrain, limited landscaping elements will be added to improve the overall look and feel of the site. Among those elements are a series of large blocks of rock. While larges pieces of blocks are not unusual landscaping fare, these blocks do hold some surprises. 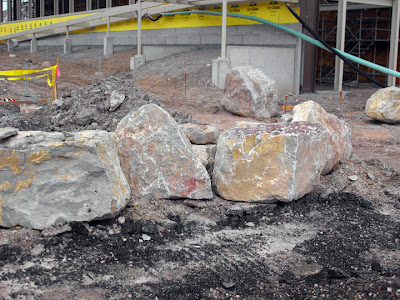 The rocks came from a quarry near Maybell, CO. They are pieces of Paleozoic limestone, carbonate rich rock formed of sediments deposited on an ocean floor well before the Age of Dinosaurs. They are grey-beige-brown and match the color of the rocks in the area of the QVC. 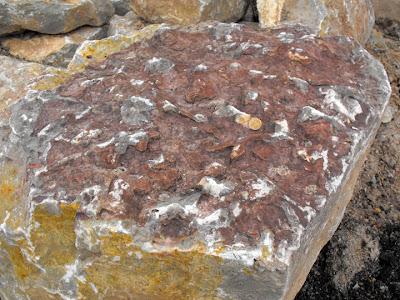 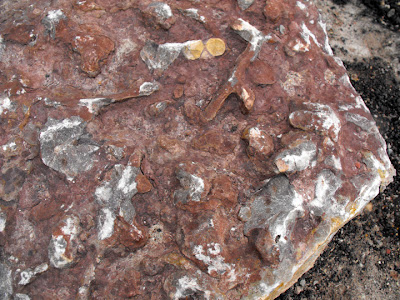 However, closer inspection of the bedding surfaces of the blocks reveals some interesting features. These surfaces are quite irregular, showing a dense pattern of thick sinuous ridges that branch and intersect, separated by depressions. The causal observer might be forgiven for thinking they are ripple currents or infilled mudcracks, if the casual observer would even notice the texture at all. 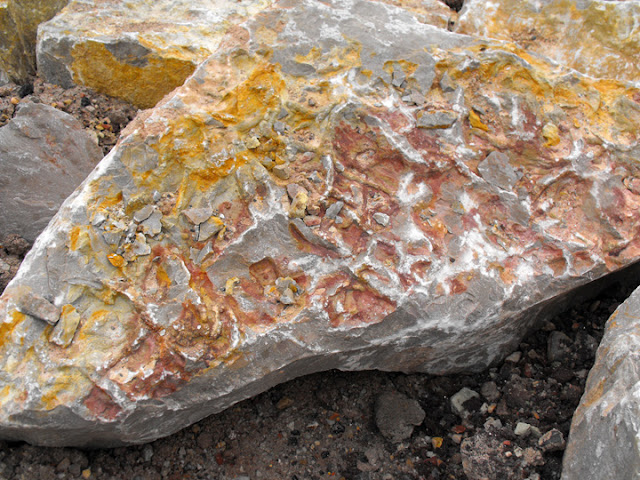 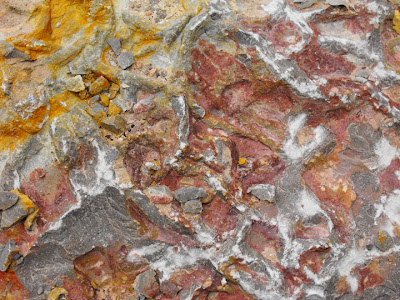 But the ridges are actually ancient burrows made by marine arthropods living on a seafloor hundreds of millions of years ago. The scientific name for these burrows is Thallasinoides. They are common fossils in marine rocks worldwide. In modern day oceans Thalassinoides-like burrows are made primarily by decapods, especially thalassinid shrimp, in intertidal and shallow subtidal marine settings (1). However, Paleozoic crustacean fossils are rare and many Paleozoic Thalassinoides may have had other makers (2)

So when you come to visit the QVC after it reopens in October 2011, remember to take a look at the landscape rocks and their burrows when you are waiting for the shuttle bus. It may be the first time that you have seen this interesting kind of fossil, although they are nowhere near as interesting as the nearby quarry full of majestic dinosaur bones.

Thanks to Tony Ekdale (paleontologist, University of Utah) for identifying the burrows as Thalassinoides. 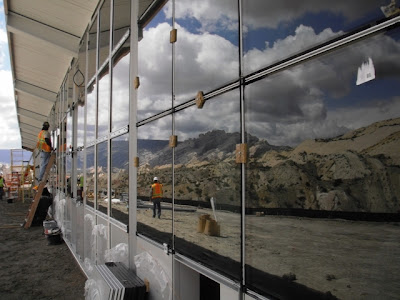 Work progresses on installing the walls of windows on the four sides of the Quarry Visitor Center. The north wall is complete and the east side is well along. Installing the glass involves several steps. 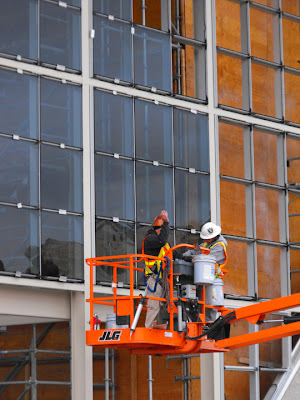 The individual planes of glass are much smaller than the space delineated by the vertical and horizontal structural beams. So smaller metal framing is first put in between the structural beams, then gaskets and flashing around each opening, and finally the glass is installed.  This is a slow and time consuming process, especially when one realizes that there will be nearly 700 panes of glass (each 3 feet x 3 feet) in the new QVC! 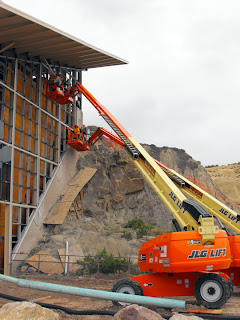 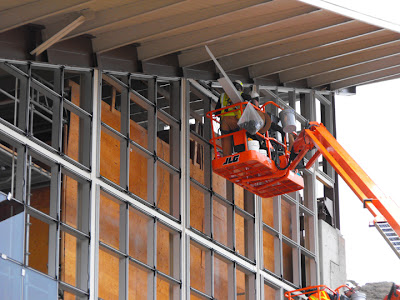 And, of course, because of the height of the walls, many of the frames and panes need to be put in from a crane and basket, which makes the work go slower. 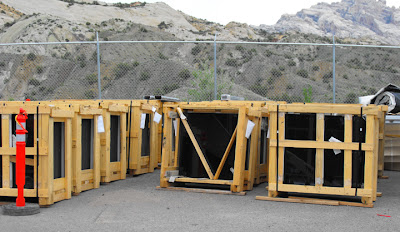 The glass is high efficiency and will help with heating and cooling and the tint will improve the ambient light inside the building.  Having thus taken care of your visitor needs at the upper end of your body, what about the other end? 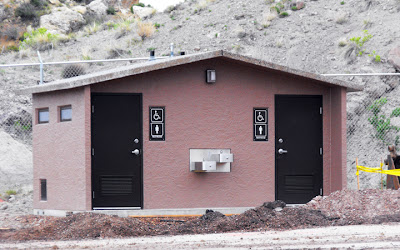 Water leaks were the bane of the 1958 QVC. Water causes the bentonitic mudstone beneath the building to swell, which makes the structure to twist and crack over time. To avoid those problems in the new QVC, virtually all water has been excluded from it, which means no inside toilets. Bathrooms have been built outside the building, near the drop off and pick up point for the shuttle that will take visitors up to the building.

Photos: NPS (with special thanks to Justin Jones for that great first photo)
Posted by Land of the Dead at 7:05 PM 2 comments: