DINOSAURS AND PALEONTOLOGISTS AT THE CARNEGIE MUSEUM

The discovery of the Carnegie Quarry is one of the most important moments in the history of vertebrate paleontology in North America. The in-situ exhibit is a landmark in both resource management and public science education. The specimens collected and preserved in the quarry are an exceedingly important record of Late Jurassic life and continue to be the basis for scientific publications (see Whitlock et al. 2010(1) for a recent example).

One of the things that the Carnegie Quarry is renowned for is the number of skeletons complete enough to be put on display. The Diplodocus skeleton at the Denver Museum of Nature and Science is the closest mount to Dinosaur of actual material from the Quarry. Other skeletons from the Quarry can be seen at the Smithsonian and the American Museum of Natural History. 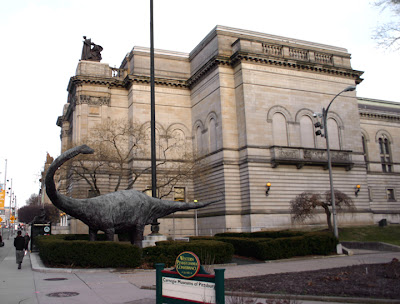 However, it is at the Carnegie Museum where the greatest number of specimens are on public exhibit. This is not surprising given that it was the Carnegie that did most of the excavations (1909-1922) and its field crews shipped 700,000 pounds of fossils back to Pittsburgh. Furthermore, over the last few years the Carnegie has completed a $45 million project of expanding and completely redoing their fossil halls, including many, many new exhibits and specimens on display. It is one of the most spectacular dinosaur exhibits in the world, so if you ever have the chance to visit the museum, see it!

Specimens from Dinosaur National Monument comprise the majority of the terrestrial vertebrates in the Jurassic Hall. The Society of Vertebrate Paleontology, a scientific society of international scope, will be holding their 70th annual meeting at the Carnegie Oct. 10-13, 2010. This will be the first time many paleontologists will have had to see the new exhibits.

For those of you who won’t be attending, here’s a peek at the specimens from Dinosaur:

I will be giving a presentation at the meetings about the QVC project (2). However, presentations are only 15 minutes long (including time for questions). So I can only touch on the high points and won’t have time for interesting side issues, such as the discovery of the 90 year old dynamite. Constant readers who have been following this blog have already gotten a much more detailed account of the work going on here.

(2) Chure, D.J. 2010. Racing Against Disaster: The Demolition, Rehabilitation and Reconstruction of the Quarry Visitor Center, Carnegie Quarry, Dinosaur National Monument. Journal of Vertebrate Paleontology 28 (supplement to no. 3): 72A.

Photos: NPS
Posted by Land of the Dead at 1:38 PM No comments:

The bentonitic mudstone underlying most of the Quarry Visitor Center has played havoc with the building for half a century. While a great deal of design and work has gone into assuring that this will not be a problem for the new building, there is still the problem of fixing the damage already done. 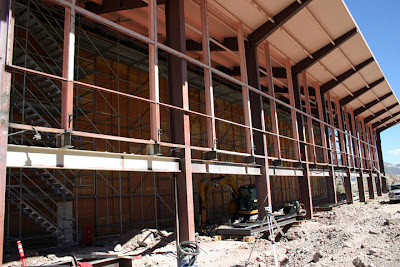 One of the most serious involves the series of vertical I-beams that will form the south wall of the redone QVC. The heaving of the bentonite pushed the beams upwards various amounts. 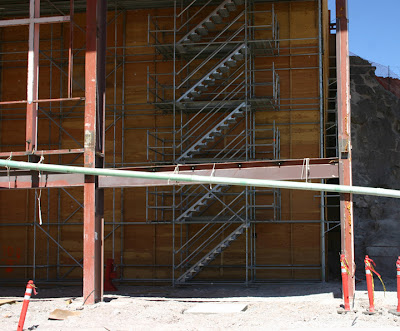 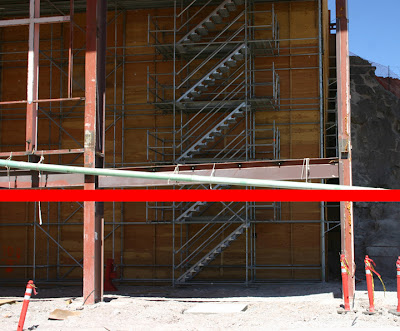 One of the most instructive examples involves the two beams at the east end of the building. Here one can see the once horizontal beam sloping upwards. The horizontal and vertical beams are still attached ---- one is not sliding past the other. What has happened is that the beam on the right has been pushed upwards 8 inches! The red line marks horizontal and the original position of the beam.

Although this is the most extreme example, all of the 10 beams have moved upwards or downwards various distances. The problem is how to get the bases of all these beams at the same level, then installing larger and deeper footers for each, in order to provide stability for the new building. 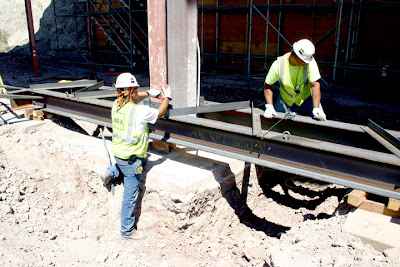 First a baseline level is determined. The bases of all beams will be adjusted to that level. As we’ve seen in previous posts, a steel frame box is temporarily attached to the beam. Then the existing footer is excavated and removed. Now comes the cool part. 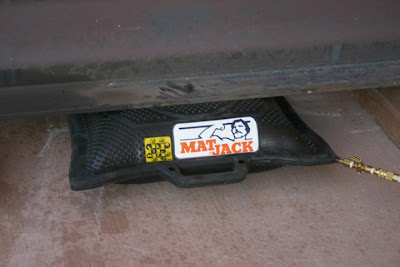 How can one adjust the height of a 50-foot tall steel I-beam that is part of the steel skeleton of a building? The Mat Jack is a thick rubberized pad that can be inflated with a compressor. The one used at dinosaur can be inflated up to 11 inches in thickness and lift a weight of up to 70 tons. 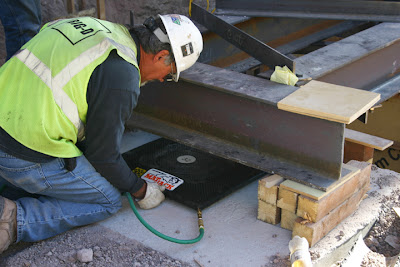 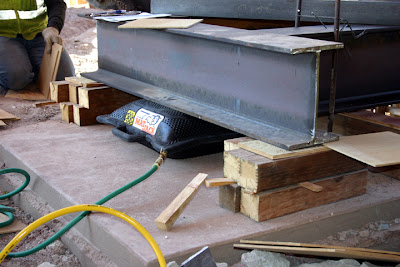 The flattened mat is placed under wooden blocks at the ends of the steel frame boxes and then slowly inflated. By monitoring the base of the beam relative to the established baseline, it can be finely adjusted until it lines up with that baseline. 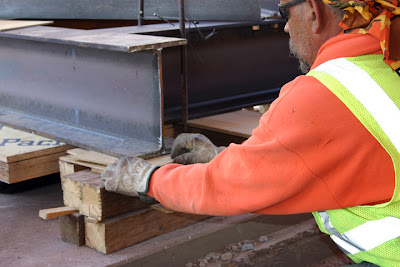 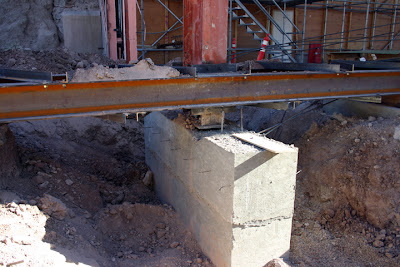 Once both sides are blocked up, the beam can be attached to the new reinforced concrete footers that are themselves attached to the 70 foot deep micropilings. Now the I-beam should be solidly anchored.

This process is repeated for each of the 10 I-beams on the south side of the building. This is a slow process, taking many weeks, but it is remarkable to watch the fine adjustments made with the Mat Jack as it lifts and supports the weight of the building. Victoria’s Secret must be green with envy.

Once completed, the building will be the most stable it has been since it was built in 1957. If it isn’t, well we can all blame this guy ----- 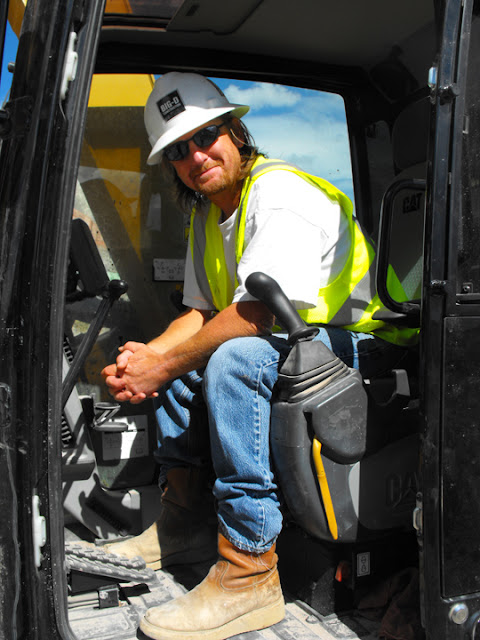 Posted by Land of the Dead at 6:09 PM No comments: