For the last 18 months I have been your on-the-spot cub reporter for the construction project at Dinosaur. But in truth I am just a lowly vertebrate paleontologist with little construction experience. I did build an awesome backyard skateboarding park, including quarterpipes, flyboxes, ramps, rails, and a really big halfpipe --- quite an accomplishment for me, but hardly real construction.

Yes, I made a small contribution as a member of the large team involved in the concept development and design of the building. However, like Blanche Dubois, I depended on the “kindness of strangers” to understand the details of the actual construction project and how it was carried out. So I need to give a special thanks to three guys who were in-charge and on-site for the entire project, Dan Cox (Advanced Solutions Group), Steve Elkins (Big-D Construction) and Justin Jones (Atkins).


Even though their days were incredibly busy with overseeing and managing the project, these gentlemen were always cheery, willing to answer my questions, and took time to explain what part of the project was underway and its unique problems and challenges. They were kind enough not to laugh out loud as I referred to a piece of construction equipment alternatively as a GJL, LJG, and JGL. I’m still not sure which is the correct acronym. Then again, they can’t tell the difference between the posterior cervical vertebrae of Brachiosaurus, Camarasaurus, and Apatosaurus.  So the Universe remains in balance.

And by the way, Big-D Construction has really great, badass graphics on their t-shirts, to wit: 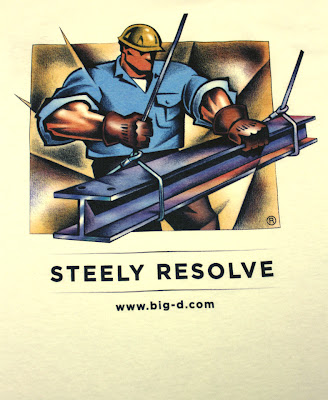 Dan, Steve, and Justin have all moved on to supervising other construction projects now and I wish them the best. However, constant reader, we have more to paleontology to explore, so stayed tuned.
Posted by Land of the Dead at 8:55 AM 1 comment:

Here’s the challenge: how do we make this …

“Differs from other plagiaulacoids in having restricted enamel on both the lower incisors and on I2; differs from all Cimolodonta in having a complete primitive dental formula of 3,1,5,2/1,0,4,2.” (1)

… understandable to the general visiting public coming to Dinosaur to learn about dinosaurs and the world they lived in?

Much of the science of vertebrate paleontology involves detailed morphological description of bones and analysis of evolutionary relationships (the latter assisted by sophisticated computer programs evaluating extensive morphological/taxonomic databases). Inferences about paleobiology can only be based on an understanding of morphology and how the components of an organism function as an integrated whole. So while a visitor may not understand, or even care about, the fact that Glirodon has restricted enamel on its incisors, they might be interested in what this means --- that these ancient diminutive mammals had self-sharpening teeth, as in rodents (even though  they have only a very remote relationship to rodents) and could gnaw on resistant plant material without dulling them. And Glirodon, whose skull is only a one inch long, is known only from the Morrison exposures in Dinosaur and nowhere else.

At Dinosaur we are faced with the further problem of having relatively little exhibit space in the Quarry Exhibit Hall. Filling that limited space up with dense text and complex illustrations of teeth and bones might get the message across to our colleagues but would tend to cause visitors’ eyes to glaze over, especially so with kids. This is further complicated by the fact that the Morrison Formation in the Monument has an exceptionally rich and diverse fossil record ranging from 80 foot dinosaurs to microscopic pollen. So to solve this problem making the scientific mumbo jumbo understandable we turned to the community of paleoartists who specialize in bringing the past back to life.

For our new exhibits we worked with Bob Walters, Tess Kissinger, and their talented staff who have extensive experience in this area, including creating the largest ever mural of a dinosaur community (check out http://www.dinoart.com/ for many examples of their artistry). They have won several prestigious awards for their work. I worked very closely with them in developing the major art piece for the QEH --- an 80 foot long, 9 foot tall , full color reconstruction of the Morrison ecosystem preserved in the rocks of Monument. We decided quite early in the process to try and show as much of the Monument’s Morrison diversity as possible. That was no mean feat given that over 60 species have been found here and most of the diversity is small non-dinosaurian animals, some microscopic. It was quite a challenge and an exciting experience. I’ll talk about the mural in the future. For now I’d like to explain how one installs such a monumental piece of art.

In a way it’s just like hanging wall paper, sort of. The entire mural is printed across numerous sheets and in one run. What that means is that if one sheet is somehow damaged or ruined the entire 80 foot mural needs to be reprinted and rehung. One cannot simply print a single sheet because the colors will be ever so slightly different and it will stand out oddly in the mural. So it’s like hanging wall paper except if something goes wrong the entire thing needs to be redone. I hate hanging wallpaper even more than I hate accordion music.

Luckily, the exhibit installers had considerable experience with this sort of thing. So let’s follow how this is done.

First a new 80 foot x 10 foot wall is installed that is flat and has smooth seams, with no gaps between sheets of drywall. 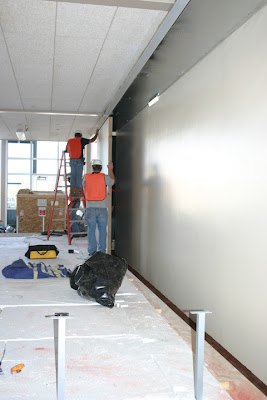 Each sheet of the mural has an adhesive back that is covered by a removable sheet of paper. Each sheet is long and wide so it it rolled up … 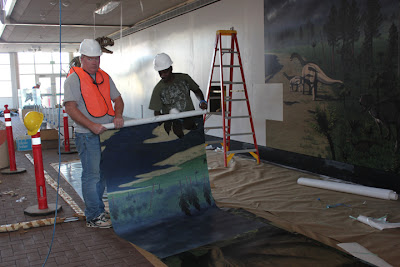 … and lined up with the top of the mural and the previously hung sheet. 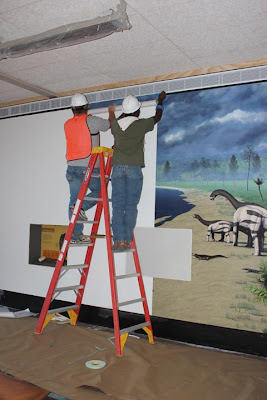 The backing is removed near the top and the sheet attached. Then the backing in removed in sections and the entire sheet is placed on the wall. 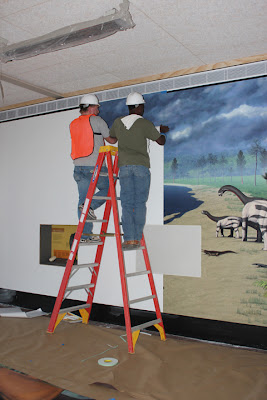 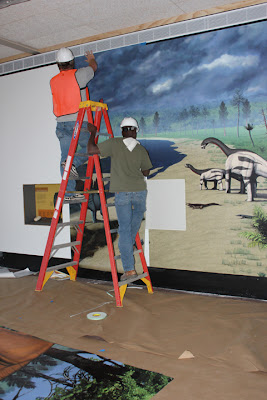 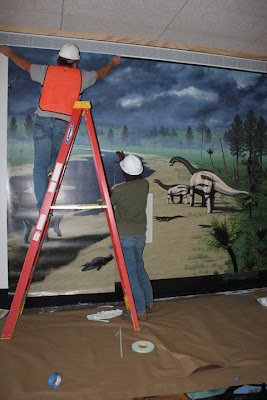 Wrinkles are a potential problem, so as the backing is removed the mural is rubbed with a soft but somewhat stiff block to make it smooth. 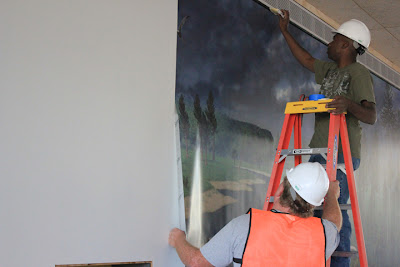 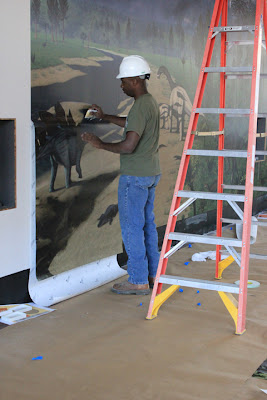 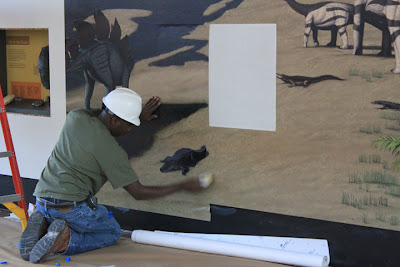 The excess at the bottom is trimmed off. 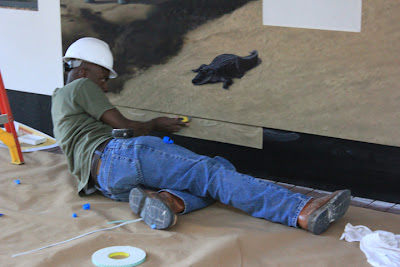 There are exhibit cases set into the mural so the parts of the mural over those cases is cut away. 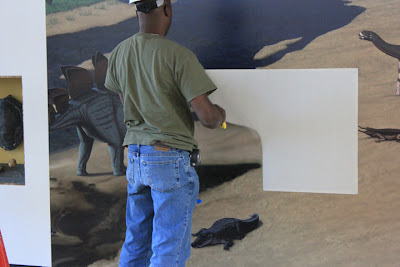 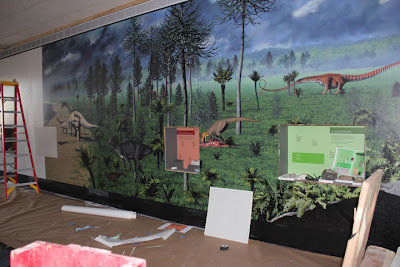 When the sheet is done, repeat process until all 80 feet of the mural is installed. 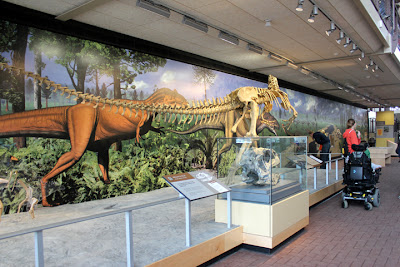 The mural is both a striking piece of art and a scientific tool of great explanatory power. Remember, much of the Morrison’s diversity is small and finding some of the animals in the mural is akin to a 149 million year old Where’s Waldo?