Understanding the life of the past can sometimes be quite challenging. For some groups of organisms there are no living descendents or even any close living relatives.  In such cases understanding their biology can be difficult and in a few cases almost impossible. Right now I and two colleagues are studying several well preserved skeletons of a new and very enigmatic fossil reptile.  Even though we have excellent fossils of this new animal and the details of the skeletal anatomy are clear, we are confounded as to the ecology of these creatures and how they made a living in the ancient desert ecosystem they inhabited. There are no living animals with such bizarre skeletons.  Some suggestions we have discussed amongst ourselves we would not dare utter in public.  It is an intriguing and yet remarkably frustrating problem.
However, in other cases, fossil organisms do have living descendents or close relatives and those living species can provide remarkable insight into the biology of their long gone antecedents.  A case in point is the spectacular Mammoth Site in Hot Springs, South Dakota.  This is the largest deposit of fossil mammoths in North America and a famous site studied by paleontologists around the world.  It is also a place where the public can go and see a most remarkable fossil deposit, where mammoths are exposed but left in place.

In 1974 excavation work for a new subdivision uncovered bones, one of which was from a mammoth.  Excavation in the same year soon revealed a skull and tusks.  Additional work uncovered more fossils and local residents worked together to eventually create the Mammoth Site. There is wonderful structure built over this unique fossil deposit in order to protect and exhibit the bones. Discoveries continue to be made as excavations are still on-going.  For an on-line 360 degree tour of the mammoth quarry, go to http://blackhills360.com/bhgalleries/mammogallery.html

By far the most common fossils in the site are Columbia mammoths (Mammuthus columbi), proboscidean brutes measuring 14 feet high at the shoulder and weighing up to 10 tons.  These behemoths ranged across North America and into Central America during the Pleistocene and could live up to 80 years.

As of 2012 some 57 Columbia Mammoths have been uncovered at the site and excavations are far from complete.  Like at my own institution, Dinosaur National Monument, the fossils at the Mammoth Site are exposed but left in place, just as they were buried tens of thousands of years ago.  However, the mammoth remains do not occur as one mass accumulation at one level.  Rather, they occur as numerous isolated, articulated skeletons, at many different levels.   Even odder is the fact that they are all males and mostly young males at that.  How did such odd deposit come to be?

The geological history of the site is well understood, thanks to the work of Robert Laury. 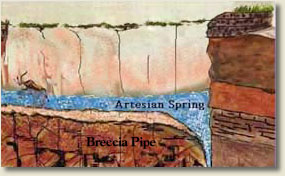 Phase 1: Some 26,000 years ago the collapse of a cave system created a sinkhole 120 feet by 150 feet and sixty feet deep. The walls were steep to overhanging.  Spring water bubbled up into the sinkhole creating a 15 foot deep pond that filled the sinkhole. This was a thermal spring, so the water in the sinkhole was warm. The invertebrate fossils in the sinkhole indicate that the pond water was very warm --- about 95-100oF. This prevented the pond from freezing and eventually allowed for year-round plant life around the margin of the sinkhole. 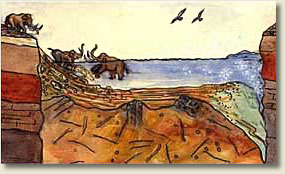 Phase 2: The year-round water supply would attract mammoths, especially during the cold Pleistocene winters that occurred during the time of the sinkhole.   Attracted to the sinkhole, some mammoths would slip and slide or fall into the sinkhole only to find that they could not climb out.  They would eventually become exhausted, drown in the pond, sink to the bottom, and become buried in sediments.This occurred repeatedly for hundreds of years. 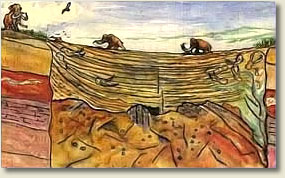 Phase 3: Sediments continue to be washed into the sinkhole from the surrounding land as well as the sides of the sinkhole itself. After some 700 years the sinkhole filled up with sediment and the spring ceased flowing, leaving a mass of mud and mammoths that remained buried until a bulldozer blade uncovered them in 1974.

So the accumulation of mammoths at the Mammoth Site is not the result of the death of a herd as a single event but rather the result of many mammoths falling into the sinkhole, one-at-a-time, over hundreds of years.  Dr. Larry Agenbroad has been leading excavations at the site since 1975. He is an expert on the paleobiology of mammoths and his research has revealed much about the lives of the mammoths entombed in the sinkhole.

Studies of living elephants shows that males and females differ in a number of skeletal features.  This is fortunate, because it allows us to determine the sex of fossil elephant skeletons.  Applying these techniques to the skeletons at the Mammoth Site shows that all the skeletons are of males.  Other skeletal features, especially involving the teeth, allow for pretty accurate estimates of an individual’s age at death. That data shows that about 87% of the mammoths were 12-29 years old at time of death. So not only are most of the mammoths at the site males, they are adolescent males.  Why?

In living elephants the herds are centered around families, i.e. females and their calves.  If there are several groups of females and calves in a herd, the oldest female, the matriarch, leads the group. Upon reaching puberty (10-12 years old) male elephants leave the herd of their birth and wander, living often alone or with a few other adolescent males.  When an adult male elephant reaches sexual maturity (35 years), he will seeks out the herds to find a mate during breeding season.  So a bull’s interaction with herds is temporary and restricted to reproductive purposes.  After breeding season the bulls leave the herds.  This knowledge provides a critical piece of evidence in unraveling the mystery of the Mammoth Site.

Mammoths had the same social organization as living elephants, with wandering adolescent males leaving the herd of their birth, and seeking out other herds when they were ready to mate. As Dr. Larry Agenbroad wryly observed about the mammoths in the sinkhole  “There is 20 to 25 years of no supervision and no protection [for the young mammoths]. So they wander as ‘loners’ or in small bachelor groups and get into really dumb places!”

Attracted by the year round water in the sinkhole, some males would get too close, slip into the sinkhole, and drown. While this was not a common event, it happened frequently enough over the 700 years of the sinkhole’s existence to compile the spectacular deposit of nearly 60 Columbia mammoths that we can see today.

So, as is often the case, the tragic story closes with the observation “A number of adolescent males were involved.”

Artwork of the geological events at the Mammoth Site:

All other images:  Dr George Englemann, University of Nebraska - Omaha
Posted by Land of the Dead at 9:10 AM 2 comments: