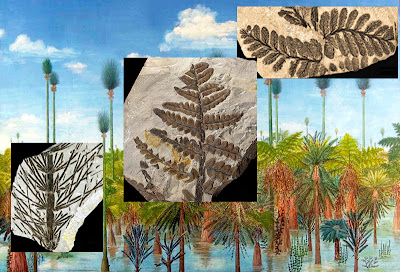 There is a mythology of sorts about finding dinosaurs.  Every skeleton is beautifully complete from the tip of the snout to the end of the tail. Each bone is in its life position. The most delicate feature is preserved uncrushed.  This propaganda is furthered by films, such as the Velociraptor excavation scene in Jurassic Park.  If only it were so.  Most of us deal with skeletons much less complete and more difficult to interpret.  But the beautiful specimens get the better press.  That’s understandable.

The situation is worse with plant fossils. Leaves and twigs, cones and flowers, roots and trunks, and all other plant parts become easily separated and scattered by water and wind or are quickly destroyed. Finding a cone attached to foliage might allow you to connect it with a branch preserved with that kind of foliage attached which might allow you to connect it to a trunk with that kind of branch attached. Such a series of fortunate discoveries will allow you to reconstruct what the total plant looked like.  Bigger questions, such as what the total plant community was like, how closely spaced or scattered were the different plants, or what was the relative abundance of the different plant species require yet more remarkable preservation, that of a whole forest. A just published paper provides just such a rare insight into an ancient coal swamp in Inner Mongolia.

Being able to accurately reconstruct how an ancient plant community is structured requires rapid burial of the forest, something on the order of hours or days, and with no transport of the dead plants.  For such a special situation one needs the help of a volcano, and a special kind of volcanic eruption at that -- a volcanic ash fall like that of Mount Vesuvius which buried the famous Roman cities of Pompeii and Herculaneum in 79 AD.

Just such a large eruption occurred some 298,000,000 years ago near what is now Wuda in Inner Mongolia.  The ash fell onto a Permian peat - coal swamp.  As the ash fell it broke off branches, twigs, leaves, and cones, toppled trees, and eventually buried the forest in-place under a 100 cm (~40 in) thick ash layer.   The floor of this forest was a thick layer of peat composed of partly decomposed plant material permanently under several centimeters of acidic water.

The quality of preservation at Wuda is outstanding and provides a fantastic record of the plant life.  Because the heights of many of the plants can be determined with confidence, we get insight into the vertical structure of the forest. The tallest trees (Sigillaria) towered over the rest of the trees, growing as tall as 25 m (82 feet) forming a sparse upper canopy.  The slightly shorter Cordaites is a primitive conifer-like tree.


While this fossil site gives us a remarkable amount of information, it includes more treasures. Because it was fossilized in-place over a short period of time by an ash fall, the bases of the trunks and roots of plants were preserved in life position. This allows us to reconstruct how the different types of plants were distributed across the swamp.

Wang and his co-authors were able to map 1000 m2 of the ancient swamp floor and record exactly where each type of plant lived.  In modern day living forests, such mapping on the scale of 200-500 m2 is considered sufficient for characterizing the forest structure.  To be able to do twice a well in a 298,000,000 old forest is just remarkable.

Specimen Ridge in Yellowstone National Park is an eight mile long cliff face with dozens of fossil forests exposed on its 2000 ft vertical surface.  While these forest are piled up on one another layer by layer, no single flat surface is exposed that shows how the trees were distributed across the forest floor.  This begs the question “So how were paleobotanists able to map the fossil plants at Wuda?  The answer is simple --- mining.

The Wuda forest is located between coal seams numbers 6 and 7 in the Wuda coal field. The ash can be seen in cross section in mine tunnels.  But to conduct the kind of study done there, a great deal of overlying rock had to be removed to get to the forest layer, at firt through normal mining information and later by the intensive and rapid mining associated with efforts to put out a severe coal mine fire. As the mining operations progress, they remove layer after layer of coal, eventually providing access to hundreds of square meters of the ancient forest floor.  A power shovel was used to break the ash layer into blocks that were then split by hand and their contained fossils mapped on a grid system. The stunning fossils needed to be quickly collected because erosion was rapid once the rock surface was exposed.

Mining operations are often quite destructive when it comes to fossils. Fossils are destroyed simply by the very act of excavating vast amounts of rock from deep in the earth.  However, there are times when mining operations enable paleontologists to study a record of the past that would otherwise never have been seen.  Several other forests like that at Wudan have been similarly studied in mines in the Czech Republic, Spain, and Germany (1, 4).


*********************************
Mines can reveal more than just plant fossils. Martin Lockley and his colleagues have studied hadrosaur dinosaur footprints preserved in the ceilings of coal mines in Utah and Colorado.  I have had the opportunity to go into a coal mine and see those tracks and they are amazing.  Tracks are sometimes bolted in place onto the ceiling to prevent them from falling and injuring or killing miners (4).

Barnum Brown collected slabs containing dinosaur tracks from a mine in Colorado and the slab is on exhibit in the Dinosaur Halls in the American Museum of Natural History (5).  Several large sauropod dinosaur footprint bearing surfaces have been exposed by strip mining and stone quarrying in Europe and some of these have now been set aside and preserved as National Parks!!