THE JOYS OF JELLIES

While I’ve never seen an organism I would call ugly, some are certainly more pleasing to the eyes than others and among the most beautiful of all are jellyfish.  I recently visited the Monterey Peninsula in California and had the opportunity to spend a day in the Monterey Bay Aquarium, as spectacular an array of living exhibits of sea life as one might ever hope to see.
I was particularly intrigued by the extensive exhibits of living jellyfish.  These diaphanous, almost otherworldly, creatures, are mesmerizing to watch as they gently drift and pulsate in their large tanks.  Some are transparent and nearly invisible without the aquarium lighting while others are opaque or even somewhat brightly colored.

It was exciting to see many hundreds of jellies while kayaking in the opaque waters of the kelp forest at Monterey. However, watching them in large exhibit tanks where currents, water filtration, and lighting are controlled allow you to a more intimate, close up, and more dramatic view.

These are among the most popular attractions, which is a good thing because maintaining a collection of jellies is a complex and expensive proposition.

Although primitive, jellies were likely the first group of multicelluar organisms to achieve movement through muscular activity.  First appearing in the Cambrian, some 500+  million years ago, jellies are a very successful group and an important component of modern marine ecosystems.  They are universally carnivorous, feeding on a wide range of organisms, from small invertebrates to boney fish, with some species specializing in feeding on other jellies.  Jellies have exploited an amazing range of environments, from cold arctic oceans to warm tropical seas and from sunny, surface waters to the abyss, 25,000+ feet deep with frigid cold, immense pressure, and eternal darkness.  There are even freshwater species.

Remarkably, jellyfish have diversified and survived with a very primitive body plan.  The umbrella shaped body, or bell,  pulsates for locomotion while the long trailing tentacles bear stinging sells for capturing and killing prey. Jellies lack a centralized brain, instead having a diffuse network of nerves running across their epidermis. However, their behavioral responses to tides, currents, other jellies (friendly and predatory), daily vertical and horizontal migration, navigation, etc. suggest that this is due to more than just simple reflexes.  There is certainly some coordination of stimulus and response within the nervous system.

Jellies don’t need gills or a respiratory system because they absorb oxygen directly through the body wall. They also lack a circulatory system. The mass of the bell is composed of a non-living jelly-like substance, the mesoglea, sandwiched between two layers of skin, each only one or a few cells thick. To top it off, they are 99% water!  Most jellies have light sensitive organs around the margin of their bells that can discern patterns of light and dark but little detail. Yet in spite of this simplicity and apparent fragility, jellyfish have weathered the five great mass extinctions in the history of life on Earth and continue to flourish and survive.

Often, while I am looking at living organisms several questions come to mind. What are these things related to?  How far back in time does this group go? What is their fossil record like?  In the case of jellies, which lack any hard parts and seem to be composed of almost nothing, the fossil record question seems particularly intriguing.

Given that jellies are, well gelatinous, they would seem to have little chance of being fossilized.  A quick glance of the scientific literature might give the impression that many fossil jellies have, in fact, been discovered, going back into the latter part of the 19th century.  However, more recent analyses with a more critical eye have shown that many of these circular and/or domed fossils have other origins.  A wide range of things have been identified as fossil jellies, such as trace fossils of marine invertebrates (like infilled feeding and dwelling burrows of worms and crustaceans),  fossil algae, and sedimentary structures of inorganic origin(such as sediment disruption from ancient releases of gases), concretions, sand volcanoes, evaporite pseudomorphs, etc.

Sometimes the jelly  is really the partial remains of other kinds of animals, such as Peytoia, the Cambrian jellyfish (below left) that turned out to be the peculiar circular mouthparts of the giant marine arthropod Anomalocaris (below right), the 2 meter predatory terror of the Cambrian seas. 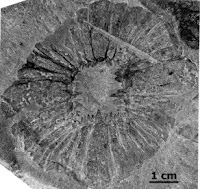 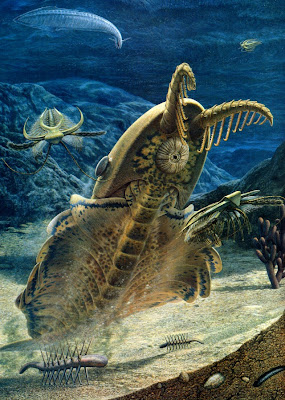 Nevertheless, there are still some fossils that are bonafide jellies.  The record is sparse, no more than nine jelly bearing rock units can be identified with certainty (Young and Hagadorn 2010).  Some of these rock units may be the same unit, but are physically  separated and not continuous, which means that distinct jelly bearing rock units may well be less than nine. In many cases the units have yielded less than 30 specimens in total.  “This is a shockingly small fossil record for groups with such importance in modern seas (Young and Hagadorn 2010).

The beautiful, graceful jelly bell-shape in the ocean often transforms into an amorphous gelatinous blob once it washes onshore.  Tentacles are delicate and are the first parts of a jelly to disappear as decomposition proceeds.  The mesoglea rapidly dehydrates when out of water so the bell may become distorted or shriveled on the beach.  So recognizing a fossil jelly (and being able to differentiate it from other kinds of fossils and sedimentary structures) can be a difficult undertaking, often requiring the careful study of  multiple specimens and considerably more detective work than, say, recognizing a bone is from a dinosaur.

Jellies occur in enormous numbers under the right conditions in right environment.  These swarms sometimes come in with the tides and are stranded on the beach when the sea retreats. As they continue to pump their bells in an attempt to escape, they often fill their stomach and other internal cavities with sand.  Similar ancient strandings can produce spectacular fossil concentrations. In Wisconsin and New York on ripple marked intertidal beds of Cambrian age (more than 510,000,000 years old), have produced tens of thousands of jellyfish fossils. 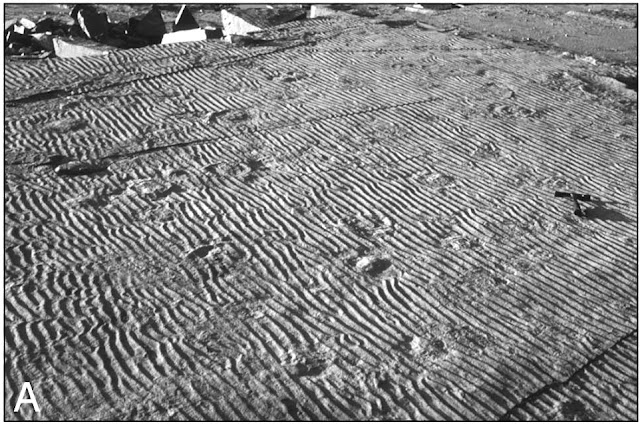 Interestingly, there are no mass strandings of jellies known in the fossil record after the Cambrian period.  This absence is not because jellies no longer occurred in mass groups, we know they continued to do so right up to the present.  Rather this peculiar record is the result of other biological factors.  During the Cambrian ALL life was in the oceans. There was no plant or animal life on land.  I don’t mean no reptiles or amphibians on land, I mean NO life on land.  Hence there were no shoreline scavengers to feed on the dead jellies.  Furthermore, during the Cambrian organisms occupied only the surface of the sea floor --- no groups had yet evolved to burrow and feed within sea floor and beach sediments.  So there were no invertebrate sediment dwellers to consume the jellies after they were buried.

Jelly fossils are also known from other kinds of ocean environments. Cambrian subtidal deposits of the Marjum Formation have yielded exceptional jellies that, unlike the Wisconsn and New York localities, have soft anatomy, such as tentacles, muscles, and reproductive organs, clearly preserved.

The ironstone concretions of the Mazon Creek of Illinois, approximately 300 million years old, have yielded more than 35,000 specimens of jellyfish!!!.

The Late Jurassic Solnhofen limestone, most famous for producing skeletons of Archaeopteryx, the oldest bird, contains abundant large jellies, up to 50 cm in diameter. Like the Marjum, these fossils also show remarkable soft tissue preservation.

The soft tissue preservation in the Marjum and Solnhofen are the result of peculiar bottom conditions in each ocean.  The Marjum has anoxic bottom waters, meaning that the oxygen levels in the water were extremely low. In the Solnhofen the bottom waters were hypersaline.  In each case, the result was that there were no scavenegers or bottom dwelling fauna to feed on or decompose the jelly carcasses after they sunk to the bottom.  The Francis Creek jellies were preserved in the brackish waters of an estuary, where iron mineral formation around dead organisms preserved many soft body animals.
Surprisingly, no unambiguous jelly fossils have been found in post-Jurassic rocks. Although some have been reported closer study has revealed them to be feeding and dwelling trace fossils. So for the last 150,000,000 years of Earth history there is no fossil record for these beautiful carnivores!  Hopefully future discoveries will begin to lift the veil on this dark and unknown chapter of jelly evolution.

A NOTE TO NITPICKERS

I have used jelly and jellyfish interchangeably here and both in the popular sense.  I am aware that true jellies are members of the class Scyphozoa, that hydromedusan jellies (including the Portugese Man of War ) are Class Hydrozoa, and cubozoan jellies are, well, Class Cubozoa. I’ve written about “jellies” in the sense that they are all medusae, i.e. umbrella shaped free swimming cnidarians, because most general followers of Land of the Dead would think of them as jellyfish.

I haven’t included comb jellies in the discussion because they belong to an entirely different phylum of animals (Ctenophora) with only a distant relationship to the Cnidaria. Yes, most people would think of a comb jelly as a jellyfish, but that was just too much of a phylogenetic stretch for me.

And yes, I know that jelly fish are not fish.

Albert, D.J. 2011. What’s on the mind of a jellyfish? A review of behavioural observations on Aurelia sp. jellyfish.  Neuroscience and Biobehavioral Review 35(3): 474-482.

All photos in Monterey Bay Aquarium by the blogger.