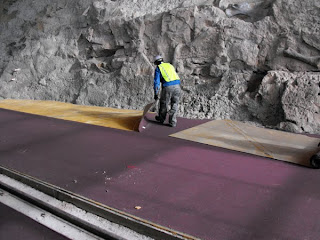 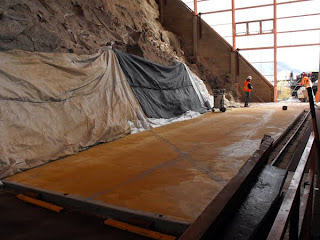 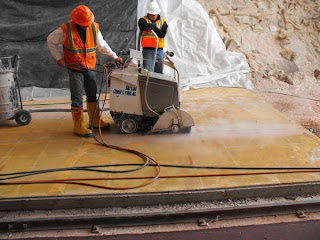 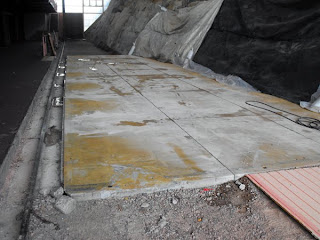 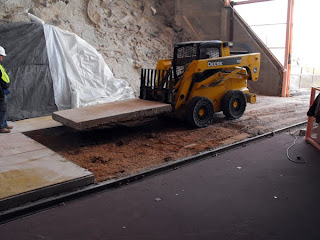 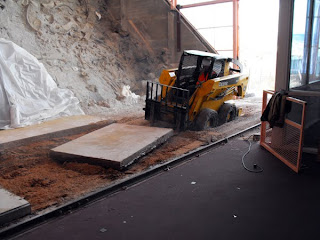 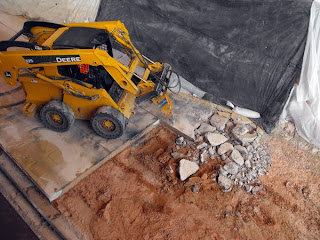 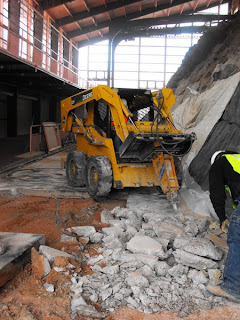 One the unusual opportunities offered to the public at Dinosaur is the chance to go up to the quarry face and touch the bones. This is not a “touch bone” sauropod femur set up on a table in an exhibit hall. Here visitors can touch any of a number of bones just as the were deposited 148,000,000 year old sandstone on the bottom of the river channel. Fortunately, a Diplodocus left major parts of its skeleton on the upper surface of the sandstone at about waist level, so touching is easy for children and adults. In order to keep visitors touching only the most durable bones, we poured a cement pad up to the cliff face and fenced in the sides of the pad. This bone touching experience was the high point of a trip to Dinosaur for millions of visitors.

However, when the rehabilitation of the Quarry Visitor is completed, the building will have an entirely new floor system. This requires removing the six inch thick cement pad running to the face. The photos in this post illustrate the major steps.

Because the pad runs up to the face, removal presented some problems in terms of protecting those Diplodocus bones. First the carpet was pulled up. Since power tools and heavy equipment were required for concrete removal, the quarry face and bones in front of the work area were draped in blankets and plastic for protection. A water lubricated cement cutting saw unit made several passes per cut to go all the way through the pad. The pad was cut into a number of 6 foot x 4 foot slabs. At first a small bobcat hauled the slabs away, but it soon became trapped in the unconsolidated soil within the building. Thus a larger and more powerful piece of machinery was used to haul out slabs.

However, the 3 foot wide strip of concrete running along and contacting the quarry face was more obstinate.That section was reinforced with rebar. To break this into smaller pieces a mechanized pneumatic drill was brought in.This was deftly maneuvered close to the quarry face and eventually the strip was reduced to rubble that could be loaded by hand and taken out of the building. From start to finish the process took about 7 hours, but the pad was eventually removed and the bones no worse for the wear.
Posted by Land of the Dead at 9:04 AM