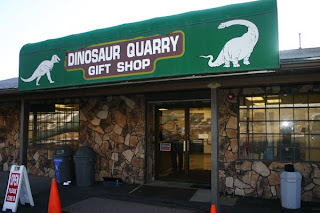 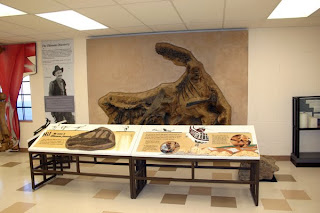 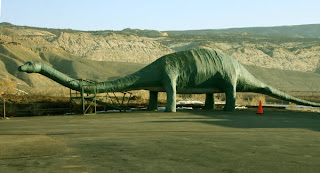 The date for the move was known well in advance, so there was plenty of time for the planning. The space required for the collections to be housed in was calculated and additional storage cabinets and open rack shelving was purchased so overcrowding could be avoided. Every fossil was carefully wrapped and packed along with its associated data in boxes labeled as to cabinet and drawer. The new collection space was painted, made secure, and radon control systems were installed. New office space was more than adequate, and file cabinets, desks, fax machines, lighting, computer and telephone networks could be moved with barely a disruption to the operations. Moving arrangements were made. Everyone was prepared and ready to go well before the day the moving began.

Whoa! Was I dreaming? What was I thinking? The move out of the Quarry Visitor Center was less than ideal and a bit more rushed. In July of 2006, after analyzing new data, engineers told us the building we had occupied for 50 years was in danger of imminent collapse, that we were playing Russian roulette allowing anyone is the building, and we had to evacuate within 48 hours. Besides the simple rush of getting all the stuff out a building, the question was where to put it. The QVC had served not only as an exhibit hall for the Carnegie Quarry, but also as the point where visitors first came when arriving in Dinosaur. So the interpretive operation took over a small building at the bottom of the Carnegie Quarry hill, a building not designed for interpretive purposes. This became informally known as the Temporary Visitor Center. It was the only building available at the time of the move. Over time we put together some interpretive exhibits and a few fossil displays for our greatly reduced visitation.

So everyone was excited when the new project was funded. Not only would the Quarry Visitor Center housing the Carnegie Quarry be completely redone, but the Temporary Visitor Center will be expanded, remodeled, and ultimately serve to introduce the public to the diverse resources in the Monument. In other words, it would become a typical NPS Visitor Center. The problem was that remodeling and reconstruction was so extensive that this building also had to be evacuated. So where to move the operation? There were no more unoccupied buildings in the Monument.

Fortunately, an old tourist shop immediately outside the entrance to the Monument had been vacated and became available to serve as a temporary temporary visitor center. So in March of 2010 the people and operations in the old temporary visitor center moved into the new temporary visitor center, but only after this latter building had been cleaned, repainted, refurbished, and had security and fire suppression systems installed. We’ve been able to put in some paleo exhibits and the Monument book store has relocated with us. This will be the visitor center until the Fall of 2011 when everything will go back into the new PERMANENT visitor center. For the summer of 2010 entrance fees will be waived and admission to Dinosaur will be free. So while we are at our present temporary location, stop by and take a ride on the hyper-realistic sauropod reconstruction. It is so unnervingly real that you’ll swear you saw it move!
Posted by Land of the Dead at 10:21 PM